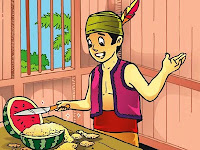 Once, in the days of yore, in Sambas, West Kalimantan, there lived a wealthy merchant. The merchant had two sons. Muzakir named his eldest son, and the youngest named Dermawan. However, both have properties and behavior are very different.


Before death, merchants divide his property equally to his two children. He intends that his children did not argue and mutual envy, especially if he had died later.


Once the property is divided, Muzakir and Dermawan living separately in their homes. Muzakir living in a luxury home, as well as Dermawan. Money section Muzakir put in the crate, then he locks. When a poor man came to his house, he instead gave alms, but a taunting laugh. Even he did not hesitate to throw if the poor did not want to leave his home.


One day, an old woman dressed in rags stagger Muzakir come to the house. In front of the house of Muzakir, the old woman begging for mercy.

"Sir, have mercy grandmother. Give me alms! "At the sound of the old woman, Muzakir out of the house and laughed at the old woman.


"Although shouted, the old woman did not want to leave. She also continued to Muzakir pleaded.


Seeing old woman did not want to go, Muzakir sent his servant to go away. Finally, the poor old woman went away without receiving anything except humiliation. The poor people who already know a stingy Muzakir properties, including the old woman said, no longer wants to Muzakir home. They then flock to the Dermawan.


Unlike Muzakir nature, Dermawan always welcomes poor people are happy and friendly. He's serving they eat and given the money because he felt pity to see them live poor and destitute. Almost every day the poor people came to his house. Eventually possessions and money Philanthropy runs out, so he could no longer cover the cost of maintaining a large home. Eventually, he moved to a smaller house, and find a job to pay for his life.


His salary is not much, just enough to eat alone. Even so, he remains grateful to the circumstances of his life. Muzakir guffaw heard Dermawan who thinks it's stupid.


"That's what always serve the poor. Surely you also poor, the Dermawan base was just stupid, "muttered the Muzakir. In fact, Muzakir feel proud of being able to buy a nicer house and a vast coconut grove. But Dermawan ignored his brother's behavior.


One day Dermawan releasing tired sitting in his yard. Suddenly a sparrow fell down before him. The bird squeaking in pain, "Poor thing," said Dermawan.


"Broken wing, huh?" Further Dermawan with sparrows speak it. He caught the bird and inspected its wings. Sure enough, the bird's wing was broken.


"Let me treat you," he said. After last assistance were wrapped bird wings slowly. Then took the rice. Sparrows were given the meal. The bird became tame and not afraid of him. A few days later, the bird was flapping its wings can, and he finally flew.


The next day it was back visiting sparrows Dermawan. There is a seed in its beak, and laid it in front of Dermawan. Dermawan smile to see it. Seeds were normal seeds. Although just plain seeds, delighted his heart received a gift bird.


Seeds were planted in his backyard. Three days later, that seed grew. It turns out, is a tree that grows watermelons. The plant is well maintained by him so as to flourish. Dermawan Initially thought to be much fruit, because a lot of interest.


"If the flowers are all a fruit, I definitely full to eat watermelon and I can partly alms to the poor," said the Dermawan heart to hope. But oddly, after several weeks of watermelon that he maintained well, but among the many flowers that only one is a fruit. Although only one, the melon is increasingly large, much bigger than a watermelon general.


A few days later, it was time for the watermelon was harvested. Dermawan fruit picking.


"Well..., not playing weight of watermelon this," muttered Dermawan panted lifted melon. Then he brought the melon into the house and laid him on the table. Then be split with a knife. After the split watermelon, how shocked Dermawan.


"Wow, what did it matter?" Dermawan asked curiously. He saw it was filled with sand yellow watermelons piled on the table. He thought just plain sand. Having noticed in earnest, it turns out that the sand is pure gold dust. Dermawan also danced for joy. He did not realize that from the outside there is a bird house noticed acting. After the bird squeaked, before she realized. Apparently, the bird is a sparrow that had he helps.


"Thank you! Thank you!" Dermawan exclaimed happily. The bird was then flown without return.


The next day, Dermawan buy a nice house with a yard broad. All the poor people who come to his house gave the meal. Although every day and every time the poor people came to her house, he will not become poor as before. The money so much and their garden overflow.


A spread news around the village that the Dermawan is not poor anymore. One day, news of the success of Dermawan heard by his brother, Muzakir. Apparently this makes Muzakir envy. He also wanted to know the secret of the success of his brother, so he went to the house of Dermawan. Dermawan told to Muzakir about his story. Knowing this, immediately ordered his slave to people looking for a bird's broken leg or broken wings everywhere.


But until a week, there was a bird they find with such characteristics. Muzakir really angry and unable to sleep. He agonized over how to get a bird's broken wing. The next morning, Muzakir got sense. He instructed his slave to catch birds with clamp (chopsticks). Of course it's a broken wing. Muzakir then pretended sorry for him and bandaged on the wings of the bird. After a few days, the bird was recovered and released to fly.


Soon, the bird was returned to Muzakir to provide a seed. Muzakir really excited. In his heart, he always hoped to quickly become rich.


"I will soon be rich beyond," said Muzakir in his heart. Provision of bird seed planted in the best his garden. Three days later, also grow watermelon trees are lush and leafy. The fruit was just one, it was bigger than Dermawan watermelon.


A few months later, it was time watermelon was harvested. Two Muzakir's servant painstakingly brought into the house because of the weight. Muzakir can not wait to see pure gold dust scattered from the melon. He immediately took a machete. He himself would split melon. Freshly cut melon, perfuse from the fruit of black mud mixed with dirt to face Muzakir. It smells like a rotting carcass. Muzakir clothing and carpet in the room was not spared from the spray of mud and dirt like porridge. Muzakir ran onto the highway while throwing up, because it does not stand the smell of the mud. People who see and smell the rotten guffaw, clapping with riuhnya. Muzakir became very embarrassed ridiculed by those around him.