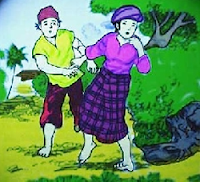 Once, in the Flower District, Lake District Kerinci Jambi, there was a woman named Princess Tangguk. She lives with her husband and seven children. To meet the needs of her family, she and her husband grow rice in paddies that only the area is small. Although only small, it can produce rice fields very much. After every harvest, the rice plants in the paddy fields and yellow appeared again. Harvested again, up again, and so on. Thanks to the diligent work day and night harvesting rice, the rice granary of seven big ones are almost full.

However, it made her forget busy doing other work. She sometimes forgot to shower so her climb be scraped off with a spoon. He also did not get in touch with neighbors and take care of seven children.

One night, while seven children were asleep, Tangguk daughter said to her husband, who was lying on the bed.

"My husband! I was tired every day harvesting rice. I wanted to take care of the kids and stay in touch to neighbors, because we like isolation, "said Putri Tangguk.

"Here's my husband! Tomorrow I wanted to meet the seven barns are on the side of the house to supply our needs next few months, "said Putri Tangguk.

"All right then. Tomorrow our children take to the field to help transport the rice to go home, "said her husband.

Moments later, they were fast asleep from exhaustion after working almost day and night. As the night wore on, the rain suddenly came down with rain. The rain only stopped when the day started early. Consequently, all the roads in the village and that leads to a slippery field.

"All right! I harvest the rice I will be here as a substitute scatter sand that is not slippery anymore, "she added.

After harvesting rice that much, almost all of the rice that they bring scattered on the road was so slippery anymore. They just bring home a bit of rice and put it in rice. In accordance with her promise, Putri Tangguk never again harvesting rice in a rice field area small it. Now, she fills her days by weaving cloth. She made clothes for herself, her husband, and for her children. However, busy weaving the cloth again making sure to stay in touch to a neighbor's house and take care of her seven children.

One day, Putri Tangguk preoccupation weave cloth from morning to evening, making sure the rice cooks in the kitchen for her husband and children. Putri Tangguk still busy weaving until late at night. Seven children were all asleep. When finished weaving, Putri Tangguk too, slept beside her children. At midnight, the Youngest woke starvation. She was crying for food. Fortunately Putri Tangguk can persuade her daughter and the child fell asleep again. After a time, the other children awoke in turn, and she managed to persuade her to go back to sleep. However, when the eldest son up and ask for food, she was not persuaded, but scolded her.

"Hey, you would have been great! No need to be serviced like a child. Take the rice in the pan itself. If not, take the rice in a tin and cook. If there is no rice, take rice and mashed own barn, "cried Putri Tangguk to her eldest daughter.

Therefore, starving, Big Sis had to obey her mother's words. However, when it came into the kitchen, she found no pot of rice and rice on the tin.

"Mom! Rice and rice are all gone. Help collision and repulse rice! Asked the elder to her mother.
"

"What did you say? Rice and rice is up? Maternal recall, there were still leftover cold rice in the pot yesterday. Rice in cans seemed to be available for two cook. There must be a thief who enters our home, "said the Putri Tangguk.

"Well, come on then. Hold it hungrily until tomorrow morning! I pounding and winnowing rice lazy, especially this time of night. 'll Disturb the neighbors, "said Putri Tangguk.

After saying that, Putri Tangguk asleep again from exhaustion after a full day weaving. Big Sis went back to sleep and he had to starve until morning.

The next day, the seventh son waking up in a rumbling stomach. The Youngest crying whining because it was not strong hunger. Similarly, the other six children, all hungry and ask for food. Tangguk daughter immediately told her husband to take the rice barn to ground.

The husband immediately headed to the rice barn next to the house. What a surprise when her husband opened a rice barn, he found an empty barn.

With a feeling of panic, she was checking out one by one the other rice barns. However, after she opened it all, not even a grain of rice seeds remaining.

"My wife...! Hurry over here! "Cried the husband to call Putri Tangguk.

"Look! All of our barns are empty. There must be a thief who took our rice, "said her husband.

Putri Tangguk just gaped in amazement. She seemed to not believe in what you just witnessed.

"Yes, my husband! Last night the thief also took us on a pot of rice and rice in a can, "added Putri Tangguk.

"But, does not matter, my husband! We still have hope. We are not rice paddy barn? "Said Putri Tangguk.

After saying that, Putri Tangguk pulled her hand and ran to the field. Once in the field, it would be Putri Tangguk disappointment, because hopes had vanished.

"My husband! dashed our expectations. Look at our field! Instead of grains, rice stalks were not there. There was only the thick grass cover our fields, "said the Putri Tangguk.

" The husband was not able to do anything about it. He was just stunned amazement watching the strange event. With sadness, Putri Tangguk and her husband returned home. Her legs felt very heavy to move. During the trip, Putri Tangguk trying to contemplate the attitudes and actions during this time.

Before I got home, she remembered the attitude and treatment of the grain to think of it just like sand and scatter on the muddy road that is not slippery.

"Yes ... God! Is that my fault so the curse is come to us? "Lamented Putri Tangguk in her heart.

When she got at home, Putri Tangguk can not do anything about it. The whole body felt weak. Nearly all day he just sat pensive. At night, she dreamed of a bearded old man wearing a long white dress.

"O Putri Tangguk! I know you have a wide field tangguk, but the results were able to fill the bottom of Lake Kerinci up to the sky. But unfortunately, Putri Tangguk! You are a proud and arrogant. You never underestimate the paddy plants with clutter such as sand coating slippery roads.


Know, O Putri Tangguk ...! Among the rice-paddy you go throw there sprig of black rice. She is our queen. If only we treated you like that, it will not be a problem. However, because the queen, we treat you like that, then we are all angry. We will not come up again and growing in your fields. The future of you and your family will suffer. Your sustenance would just like chicken sustenance. The work of a day, enough to eat everyday. You and your family will not eat if it does not work yet. Your life will really like chicken, paw first and eat .... "said the old man in the dream Putri Tangguk.

Putri Tangguk not had time to say anything, the old man had disappeared. She awoke from her sleep when the morning was now. She was very sad to contemplate all of what the old man who came in her dream last night. She will live with her family to misery. She was very sorry for all of her actions were arrogant scatter rice to coat slippery roads. However, what's in a regret. Nor to regret later.