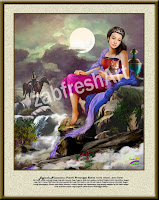 In ancient times in West Java there is a kingdom called the kingdom Pakuan. Pakuan is a very fertile kingdom and has a very beautiful natural scenery. His people were living peacefully under the leadership of a wise king.

In the palace there were two teenage girls who are both lovely and always looks very harmonious. The one named Endahwarni and one named Anteh.

The King and Queen are very fond of both of them, although the girls have different social status. Princess Endahwarni is Pakuan royal heir, while Nyai Anteh was just a lady beloved son of the queen. Because Nyai Dadap, Nyai Anteh mother had died in childbirth Anteh, so since then Nyai Anteh Endahwarni brought along daughter who happened to be born. Now that Nyai Anteh a teenager, he was appointed as personal attendants Endahwarni daughter.

You do not call me Gusti daughter when she was two with me, the princess said. "To me you're still beloved sister. No matter satatusmu that only a lady. Remember since our baby grew up together, so until whenever we will remain brothers. Caution ya! If I forgot to mention you will be legal! "

Anteh, actually I envy you, the princess said.

"Ah, why envy kak. I do not have anything that can make other people envious, Anteh said surprised."

"Do not you know that you are more beautiful than me. If you're a princess, the prince would have been a lot of asking you to marry, " the princess said, smiling.

"Ha ha ha .. sister could have. How could such an ugly face arguably pretty. Endah is beautiful. Yesterday alone time across the prince of the kingdom to come, he got fascinated by the brother. Kak is not it? Replied" Anteh with passion.

"Well you could have. That's because at that time you choose clothes that suit me. Oh yes you made in which the tailor that dress? the" daughter said.

"Really? Well I do not think you're good at sewing. Then next time you have to make clothes for me again yes. Hmmmm ... maybe dress bride? the daughter said."

"Oh where dare I make a dress for sister's wedding. If bad, I would get yelled at people, Anteh said fear ."

"It will not fail! Yesterday alone can dress a wedding dress ... so too can do it, the daughter said firmly."

One night the queen summoned Endahwarni and Nyai Anteh daughter to her room. "Endah my daughter, there is something to the mother talk," the queen said.

"Endah, you are my only son. Soon you will be queen replace Pakuan father lead the people, the queen said. ""Pursuant to court you have to have" a companion to live before they can be appointed as queen."

You mean Mom, Endah should get married? the daughter said.

"Yes, son, father and mother also have to negotiate and agree a suitable candidate companion that you are Anantakusuma, son of Duke of the Duchy Wetan. He was a good man and he's even more dashing and handsome. You'll be happy with him, the queen said ."

"And you Anteh, your job is to maintain and provide your sister needs to not happen to her."

That night Endahwarni asked Nyai Anteh daughter to accompany him.

I'm scared to Anteh, daughter said sadly. "How can I marry someone who did not know me. What if he does not love me? "

Brother do not think badly of it, consoled Anteh. "I believe gusti King and Queen will not arbitrarily choose a mate for Brother. And the young man who would not fall in love to see beauty sister. Ah well, brother calm and pray. Hopefully everything goes smoothly ".

One sunny morning, Anteh is collecting jasmine flowers to decorate a princess bun Endahwarni. Anteh glad to see the flowers bloom and butterflies to vie interest. He started humming happily. Anteh a melodious voice windblown fly through the castle wall. Just then a handsome young man was walking in the garden behind the palace walls. He wonderstruck heard a voice so sweet. It turns out the young man was Anantakusuma. He is very powerful, it is so high castle wall with ease dilompatinya. He hid behind gerumbulan flowers, and behold him a very pretty girl. Anantakusuma felt his chest vibrate, "how beautiful she was, whether she was the daughter Endahwarni future wife?" He thought. Anantakusuma out of hiding. Anteh surprised when suddenly a young man appeared in front of a stranger.

I Anantakusuma. Are you ..... no time to ask someone to call Anteh Anantakusuma. "Anteh!!! Hurry!!! Princess call, " a lady said.

Yes. I am coming soon. Sorry sir I have to go, the straight said Anteh fled Anantakusuma.

He was not Endahwarni, thought Anantakusuma. "And I fell in love with her. I wish he was the one who became my wife. "

A few days later, in another palace look busy than usual. Today Wetan Duke will come with his son, Anantakusuma, to formally apply Endahwarni daughter. King and Queen entertains guests with joy. Princess Endahwarni also seemed happy to see her husband very dashing and handsome. As with Anantakusuma seen no spirit. He was disappointed that it was not going to marry the girl of his dreams.

Came the banquet. Anteh and some other palace maids entered the room carrying trays of food.

Thanks Anteh, please direct taste, the king said to guests.

Anantakusuma stunned to see his dream girl is now in front of him. His throat was dry and his eyes would not be separated from Nyai Anteh who was busy arranging the dish. The incident did not go unnoticed Endahwarni daughter. Pahamlah her that her husband had put his heart on another girl, and the girl is Anteh. Princess Endahwarni feel jealous, disappointed and hurt. Arising revenge in his heart to Anteh. She felt so guilty Anteh that's why Anantakusuma not love her.

After supper finished and daughter back to her room, Anteh meet the princess.

"Anteh, from this moment you do not have to serve. I also do not want you near me. I do not want to see your face, the princess Endahwarni said."

A.. Anything fault kak? Why brother suddenly so angry? Asked Anteh surprised.

But why kak? At least say what is my fault? Cried Anteh.

"Ah do not question. You've mengkianatiku. Because you do not love me Anantakusuma. He loves you. I know that. And it's because he sees that you're prettier than me. You gotta get out of here Anteh, let Anantakusuma could forget, the daughter said."

"Well brother, I will go from here. But brother, I really do not ever want to betray the slightest sister. Please give an apology and my thanks to Gusti King and Queen. "

Anteh moved away from Endahwarni toward her daughter's room and started packing her things. To the other ladies told to keep her daughter Endahwarni well.

Nyai Anteh walked out of the palace gates, not knowing what to do outside of the palace. But he decided to go to his mother's hometown. Anteh've never been there, but it was a couple of senior ladies ever tell. When it was almost evening, Anteh arrived at the village where his mother was born. When he was pondered what to do, suddenly a man who has lived reprimanded.

Sorry kid, if the kid is not here, he asked.

"Oh sorry I do not mean to scare, but the face reminds me of someone. You look a lot like my brother Dadap, "

"Dadap? Dadap also my mother's name. Is the brother uncle worked as maids in the palace? Asked Anteh."

Oh, then you are my nephew. I was Waru uncle, mother's sister, the uncle Waru said with tears in her eyes.

What were you doing here? Are not you a lady? Asked Uncle Waru.

"Long story uncle. But may I ask permission to stay at my uncle's house. I do not know where to go, pleaded Anteh."

Since then Anteh live at her uncle's house in the village. To help her uncle, Anteh received orders to sew clothes. First sew clothes Anteh neighbors for long because the seams are nice, the people of the village, too far to Anteh sew their clothes. So he and his uncle's family could live quite of outcome sewing.

Many years have passed. Anteh now is married and has two children. One day in front of his carriage and stop a lot of guards on horseback. Once the owner's stuck his head carriage, Anteh scream. Turns out it was the daughter Endahwarni. Endahwarni daughter got off the train and burst into tears hugging Anteh.

"Oh Anteh, been a while since I mecarimu! Where were you during the ni? Why do not you call me though? Did I really hurt you? I'm sorry Anteh. At that time I was desperate, so I kick you when you're innocent. I'm sorry ... cried" the daughter.

"Not. I am guilty. For that Anteh, you should come with me back to the palace! Pleaded daughter."

"But I now have a daughter of her husband and children. I also worked as a seamstress. If I go, they will lose, Anteh said ."

"My husband and children of course should you take as well to the palace, the princess said, laughing. ""On the job, you're going to I" lift a court dressmaker. How? You can not resist, it's an order! "

Finally Anteh and his family moved into the palace. Endahwarni daughter has made a home on the edge of the park for their stay. However Anteh always feel bad every meet Anantakusuma prince, princess Endahwarni husband. Prince Anantakusuma apparently never forgot his dream girl. The return Anteh have made love buried rise again. At first the prince Anantakusuma try to survive by not considering the presence Anteh. But more and more tempestuous love.

Until one night Anantakusuma reckless prince went into the palace garden, who knows he could meet with Anteh. Yeah, right. Anteh saw was in his porch, was joking with Candramawat, her beloved cat while enjoying the beauty of the full moon. Although now old, but the prince Anantakusuma, Anteh still as pretty as the first time they met. Anteh slowly approached.

Pa .. prince? Why prince here? What if no one is watching? Asked Anteh fear.

"I do not care. The important thing is I can be with you. Anteh you know what? That I love you so much. Since we met in the park to this day, I still love you, the prince said."

"Prince, you must not say that. You are the daughter husband Endahwarni. He is the older brother I loved so much. If you hurt him, you hurt are the same, he said, hugging Anteh Candramawat."

"I can not ... I can not forget you! You must be mine Anteh! Come let me hug you, the prince said, trying to hold hands Anteh."

Anteh recoil in horror. "Snap prince! You must not betray Gusti daughter. " 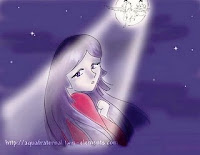 Suddenly there was a power Anteh feel pulled himself up. He looked up and saw the moon enveloped and pulled. Prince Anantakusuma only be struck by the departure Anteh higher and higher and finally disappeared with clouds covered the moon.

Since then Nyai Anteh live on the moon, alone and only accompanied by her beloved cat. He could not return to Earth because of fear of the prince Anantakusuma going after him. If the longing in her family was unbearable, he would weave the fabric to be used as stairs. But love never finishes weaving because the cat always ruin it. Now if we could see the full moon shadow weave accompanied Nyai Anteh sit Candramawat.

That's the story of the caretaker Nyai Anteh months.