Once, on the ground there lived a young man named Bengkalis Bujang Enok. He lived poor and lonely, fatherless, motherless, not even brothers. However, he is a fine young man and a generous heart. Work daily to fetch wood fire in the woods, which he sold to the market or be exchanged with rice and other life needs.

One morning, Bujang Enok was walking in the forest, he suddenly confronted by a poisonous snake.

"Ssssss ssssss ...... .....", hissing snake sticking out their tongue at Bujang Enok. Seeing the snake, Bujang Enok trying cleared well, but do not also want to go. Then he squelched. When he set aside, the snake was just about to peck Bujang Enok. By necessity, even prod him with Bujang Enok semambu (rattan cane), heirloom legacy of his late father. Once whip, venomous snakes were writhing and dying. Having looked immobile again, Bujang Enok immediately bury the snake by the roadside. After that, he began gathering wood. When will start his job, he heard a woman's voice in the conversation.

"Venomous snake is dead," said a female voice from the depths of the river upstream.

"Thankfully, we will not disturb the snake again," said another female voice.

Increasingly, more and more voices are clearly heard by a Bujang Enok, but he did not heed the voice, and he continued his work gathering wood.

At noon, as usual Bujang Enok returned to his hut. When he went into the kitchen hut, Bujang Enok was surprised, because the rice was available in the kitchen and all the side dishes were delicious taste. An unbearable hunger, he was immediately devoured all the dishes presented it. While enjoying the delicious food, the Bujang Enok wondered to myself..

"My mother had died, I did not have a brother, a neighbor is also very far from here. So who ya ..... who serve this food? '. These thoughts kept running through his mind. Out of curiosity, he intended to find out the people who serve the food.

The next day, Bujang Enok implement his intention to seek out people who have dared to go into the hut. That day he decided not to go to the forest. From morning to noon waiting for people coming into the cabin. Bujang Enok waited in the bushes that are not far from the cottage. By midday, suddenly from the depths, came seven lovely girl. They come in a procession and uphold the dish, then went into the hut Bujang Enok. The seven girls were wearing rainbow-colored scarves. However, of the seven girls, girls orange scarf most beautiful colors.

"Wow, that girl's beautiful orange scarf ?", Bujang Enok muttered as he watched the girl to disappear from view.

Shortly thereafter, she was seventh out of the hut Bujang Enok, and walked toward the bottom of the river. With careful steps, Bujang Enok the seventh trailing dainty girl was up to the bottom edge of the river, and then hid in a hedge of bushes.

Behind the bush, Bujang Enok could see seven girls to be changed amid a shower. Each hook her shawl on a wooden stick. They shower while bersendau joke, until he noticed the Bujang Enok is not far from where they shower. The atmosphere is lively, the Bujang Enok used to take a scarf hanging in the branches. From behind the bushes, Bujang Enok hooking a stick into the orange scarf. Then he pulled it slowly, and then grabbed the scarf and hiding under her clothes. After that, he went back to hiding behind the bushes.

After bathing, the seven girls up to the edge of the bottom and change clothes. Each took and put on her shawl hanging on the branches. However, among the seven girls there was a girl who loses her shawl.

Asked the girl, looking for a lost shawl. However, no one knows where his scarf. Then, she went on her quest, assisted by six other girls. After a while they were looking for, but the orange scarf never found. By late afternoon, the six girls who have been wearing scarves, suddenly danced and then drifting into space leaving the girl who lost the scarf alone at the bottom edge. In the meantime, Bujang Enok were astonished witnessed the event from behind the bushes. Bujang Enok kept looking at her without blinking sixth bit. The higher fly into space, the smaller the sixth girl look. Until they finally disappeared from view Bujang Enok.

After that, Bujang Enok out of hiding and approached the girl who was looking for her shawl.

"What are you looking for, my beautiful girl" asked Bujang Enok.

"Sir, if you knows orange scarf, shawl I beg restore it," pleaded the girl he worshiped.

"I am willing to return the lady's scarf orange, but on condition, my lady to marry me," said Bujang Enok.

"Yes, I promised to marry you, as long as can promise you all, if I had to dance, then we'll divorce you," she said with genuine beauty.

"Well, I am willing to remember that promise. My name Bujang Enok," said Bujang Enok introduce himself.

Since then, they build an ark love in the household. Bujang Enok and Mambang Linau and live a happy, harmonious and fulfilling.

Since her marriage to Mambang Linau, Bujang Enok increasingly famous in his village with the merciful nature. The generous of Bujang Enok was heard by the King in power in the country. Then the king summoned Bujang Enok facing him to be appointed as Batin (village head) in the village Petalangan. Bujang Enok came to the palace.

Once in the presence of the king, "Please, Your Majesty! What the hell Majesty summoned me?", Bujang Enok asked her salute.

"O Bujang Enok, would you mind I made in the village Petalangan?", The King asked anyway.

"Please, Your Majesty! If it is the will of the king, gladly willing servant to mind, "he replied softly Bujang Enok salute.

Bujang Enok willingness to make the King happy mind. A few days later, Bujang Enok was inducted into the Inner Petalangan in the village.

Since becoming Batin, Bujang Enok became one of the King's confidence. Each party, the King always invite Bujang Enok.

One day, the King held a party at the palace. The party shall be filled with dances presented by ladies, princes palace wife, wives of princes and the king's confidence, including Bujang Enok's wife, Princess Mambang Linau. Once the show began, one by one the wives present their dance. Princess Mambang Linau watching a dance, started pounding. In her heart, "If I come to dance, then I'm getting a divorce with my husband."

" No sooner had she finished muttered, suddenly..

"We are pleased Princess Mambang Linau," the word of the King accompanied by the applause of the audience. Hear the word of the king, her heart pounding even more. Bujang Enok flunky who sat beside him turned to his wife..

Mambang Linau understand the meaning of his whisper, and replied "By upholding the king and gratitude for the prestige of the country, I am willing to dance," said Mambang Linau while wearing orange scarves and then headed to the stage.

Before starting dance, Princess Mambang Linau first perform movements offerings to maintain the decorum and respect in the palace of the King. After that, he began to dance like a hawk. She waved her shawl while flapping-pulled. Slowly raised her legs like no foothold on Earth. Suddenly Princess Mambang Linau contort her body, and immediately he was flying, soaring into the sky toward heaven. All present gasped witness the event. Since then, Princess Mambang Linau never to return again.

Since then, the Inner Bujang Enok divorced love with Princess Mambang Linau. How great sacrifice Bujang Enok. He was willing to divorce his wife for the sake of upholding the precepts of the King. Realizing this, the King was awarded an honorary Bujang Enok Penghulu inducted into the ruling in the court. This event is also born of a poem that reads :

Take the hint of lime

Try to taste at the ends of all

After the event, the King of State utter that to honor the sacrifices Bujang Enok, the dance event held every year offerings. This dance tells the Princess Mambang Linau from meeting to parting with Bujang Enok. Because the movement resembles an eagle was flying (eagle babegar), then dance the dance called hawks. Now, people prefer to call it dance Riau-Olang Olang. Olang Olang-dance is usually played with the accompaniment of drum (gubano) fiddle, calempong and gong. This dance can be found in the district and Merbau Siak, Bengkalis regency, Riau, Indonesia. 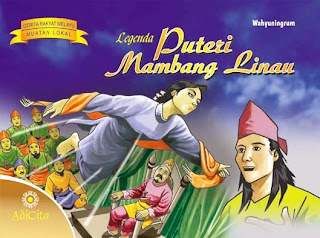